Not as great as the first 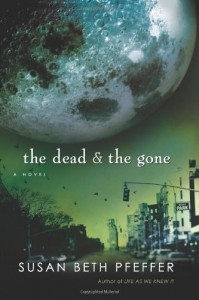 Life as We Knew It was pretty good. I enjoyed reading it. The Dead and the Gone isn’t really a continuation of the first one, it’s set in a different setting this time in New York City. Instead of a female protagonist, we have a male one who’s like the previous main character, has a family to take care of.

What I liked about this book is the development of the setting. I liked how throughout the book areas around Alex and his sisters start dying out, and the city starts getting abandoned slowly. I enjoyed how this was illustrated throughout the story. Character development was well done in this book. I thought Julie did a lot of growing up especially during the last third of the book. Alex, well he did take charge of being the ‘man of the house’ but he wasn’t a great as a main character as I hoped he would be. Bri on the other hand, just ended up being the annoying character nobody wants to read about.

The plot itself isn’t as good as the first one, but it’s still worth a read through at least once at least to see good character development and how it was like in a different setting. I’ll be continuing along this series as it does have a lot of potential. I hope it doesn’t fall short.