Much better than the third one 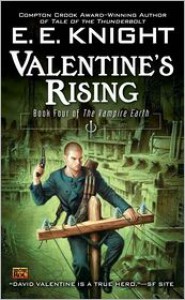 I was pleasantly surprised with this book after the drivel that was number three. I’m not sure if it was because Valentine decide to finally grow up and get a pair or circumstances in the novel made him this way (likely the latter) but it made for very good reading. There were some very important choices Valentine had to  make for himself and his crew; some of them extremely difficult and the way he dealt with the aftermath was good. It was nice to finally see him being part of a team instead of a one man army and doing everything himself.

Again the supporting characters are what made this book going for me (still on the anti-Valentine train for now) they had their distinct personalities and they weren’t flat or meant to just be part of the plot. They each had their part to play whether small or big and it made the plot better and rounded out. I have a soft spot for Ahn-Kha and Styachowski I like them both for their strengths and although they were ‘quiet’ they played substantially in the plot. (More so Styachowski than Ahn-Kha).

The plot was good albeit it slowed down to a crawl at the end. It was getting to be too much and by that time, I was already wanting to close the book. There’s plenty of action so that does not disappoint. There were some parts where I came close to closing it because of Valentine’s idiotic behavior, but otherwise, this was much better than the third.

This one was enough to redeem itself so I will carry on and read the next. I hope it continues this way.